A nice, basic study looks at how altering the location of inhibition onto a pyramidal cell neurite affects its spiking properties. Their inhibition is meant to mimic the effects of cortical interneurons (e.g., basket cells, Martinotti cells), which project onto pyramidal cells each with their own stereotyped spatial distributions.

Here’s just one of many examples in their extensive report. When they applied inhibition (GABA) to pyramidal cell dendrites further from the soma than their excitatory signal (laser-based glutamate uncaging), which they called “distal inhibition”, it led to an increased threshold required for a spike to occur. But, it didn’t change the intensity of that spike when it did occur.

In constrast, when they applied inhibition to pyramidal cell dendrites between the excitatory signal and the soma, which they called “on-the-path inhibition”, it both slightly increased the depolarization threshold and reduced the spike heights when they did occur. You can see this all below. 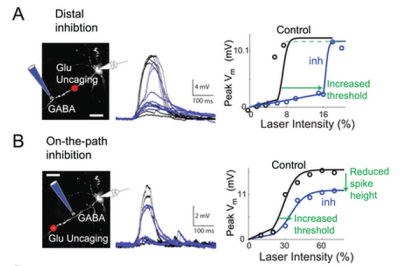 As an example of how this could be used, let’s say that, on the basis of connectomics data, you discover that a certain set of cells send projections to pyramidal cells which are systematically distal to the projections from a different set of cells.

What you can then say is that the former class of cells is acting to increase the depolarization threshold which the latter set of cells needs to exceed in order to induce those pyramidal cells to spike. Pretty cool.

View all posts by Andy

Thank you for reading!